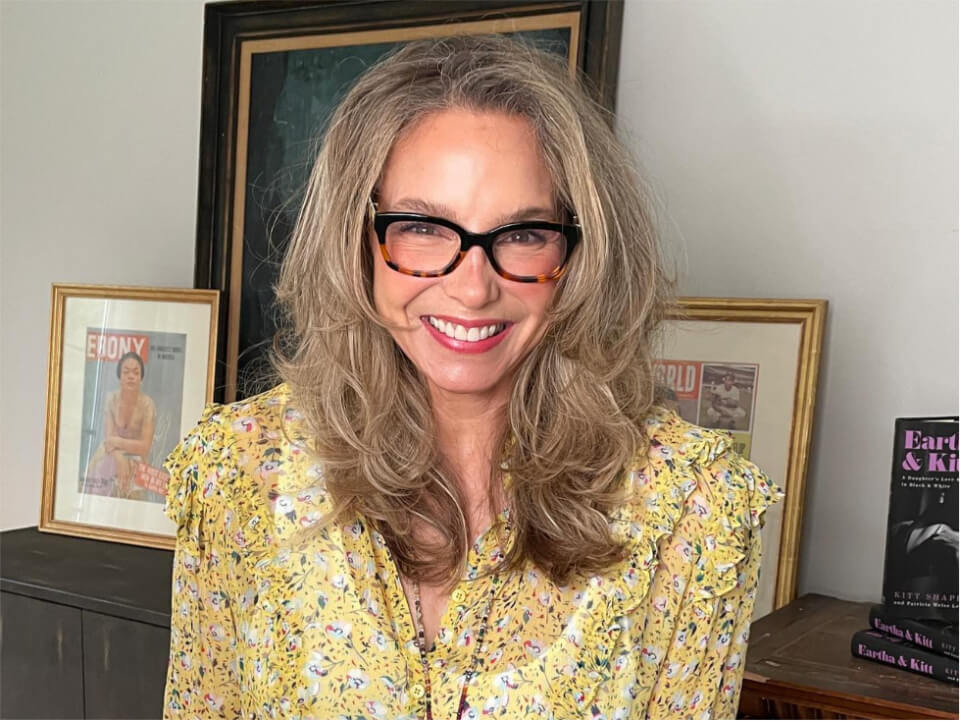 Kitt McDonald Shapiro is a reputable American businesswoman in the USA. She is the daughter of famous American Actress Eartha Kitt. She is also the owner and founder of Simply Eartha LLC. since January 2012 a lifestyle brand of home decor, jewelry, and stationery items, incorporating the wisdom and beauty of my mother, Eartha Kitt. Kitt Shapiro is also a writer and creator. Apart from this, she was the author of the book – In Eartha & Kitt: A Daughter’s Love Story in Black & White which describes – Eartha Kitt’s (mother) roots and strength of character. On 26 September, Kitt spotted @TamronHallShow #LetsTalkAboutIt and this is why she is in the news as of September 2022.

Kitt McDonald Shapiro was born on 26 November 1961 at Blessed Sacrament Catholic Church. Her father’s name is John W. McDonald and her mother’s name is Eartha Kitt, a legendary actress, and singer in America. Her mother, Eartha Kitt died on 25 December 2008 because of Colon Cancer. She went to Le Lycée Français de Los Angeles (a private bilingual education school). Later, she went to Barnard College in New York to get higher studies.

She is the owner and founder of Simply Eartha LLC. She sells home accents and fashion accessories, necklaces, bracelets, books, and much more. Since 1989, she has been President of Eartha Kitt Productions Inc. She played a featured role in All by Myself: The Eartha Kitt Story which was a Documentary profile of singer-actress Eartha Kitt by Director Christian Blackwood with other stars EarthaKitt and Cecil Gorey.

Since 2016, Kitt has been a committee chair member in ‘Women Leading The Way To Wellness’. In May 2019, Kitt was interviewed by Victoria Adelaide in Beautiful Humans, a magazine with purpose. Presently, She is the owner of a boutique store since January 2019 – WEST TO WESTPORT, Inc., located in Westport, Connecticut.

Kitt is active on social media platforms such as Twitter, Instagram, Linkedin, and Facebook. On her official Twitter account @kittshapiro, she has 3576 followers. On her Instagram account @kittshapiro, she has 14.8k followers. Kitt donates to the American Cancer Society and supports Colon Cancer Alliance. She held the position of Board member of the Colon Cancer Alliance from June 2014 to August 2016 to help educate the importance of screening and early detection, so that possibly, one other person can be spared from suffering.

Kitt McDonald Shapiro’s marital status is married. Kitt McDonald married Charles Lawrence Shapiro in 1987. Both the couple had two children, Jason Shapiro (Son) and Rachel Nora Shapiro (Daughter). Her second husband’s name is Allan Bruce Rothschild who is the son of Rita and Stanley Rothschild. The couple officially tied their wedding knot on 26 May 2002.

Kitt is the daughter of the famous Eartha Kitt. Besides, she is the owner and founder of Simply Eartha LLC. It is safe to say that Kitt Shapiro earns an estimated net worth of $15- $20 million.