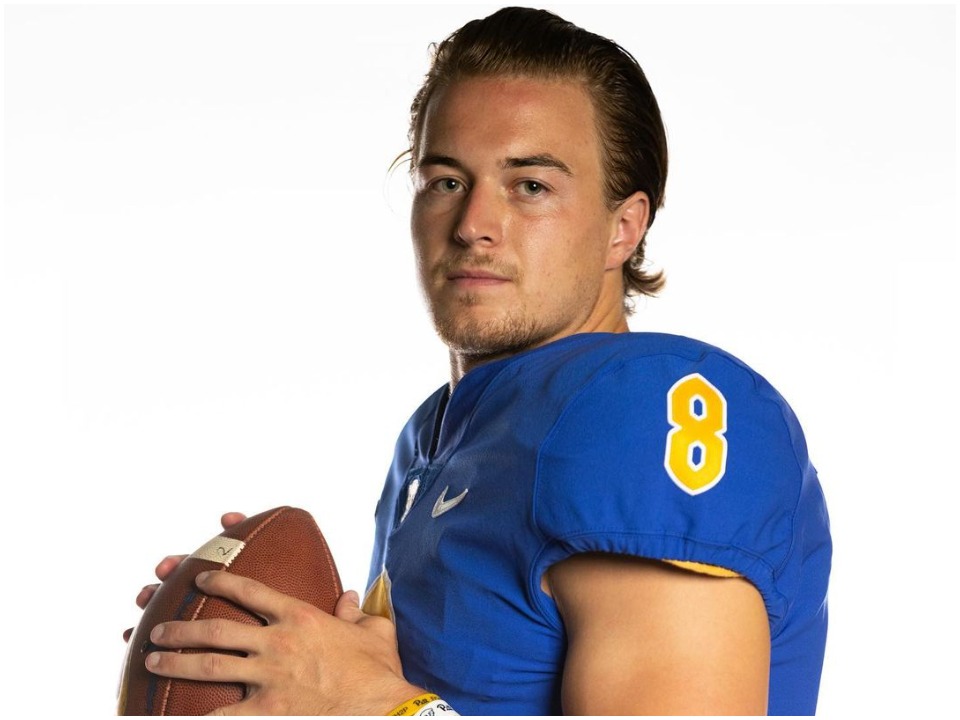 Kenny Pickett, originally known as Kenneth Shane Pickett is an American personality who plays football as a quarterback for the Pittsburgh Panthers. Kenny took his game to a whole new level in the past and because of that, he became one of the contenders for the Heisman Award 2021. Just a while ago, Pittsburg Steelers drafted him in the NFL Draft 2022 with great hope to replace the spot left behind by Ben Roethlisberger.

Kenny Pickett was born on 16th June 1998 in Ocean Township, Monmouth County, New Jersey where he has raised his whole life. For basic school education, he attended Ocean Township High School where his interest in sports rose. As a junior, he played for his high school team and led his team to the New Jersey Central Group III semifinal game making an overall record of 9-2.

247Sports ranked Kenny Pickett at number 23 among the high school football players in senior year. During his football career, He passed for 4,670 yards with 43 touchdowns. He rushed for 873 yards and 17 touchdowns during his whole junior career. First, he got committed to playing football for Temple University but later, he changed his commitment and choose to play for the University of Pittsburgh.

He attended his first career game in Pittsburgh’s final game in 2017 against the second-ranked Miami Hurricanes. Kenny led his team to complete 18 out of 29 passes and earned 193 yards. He rushed for 60 yards and two touchdowns during the game. Moreover, he completed his whole season while passing for 39 out of 66 passes and making 509 yards with one touchdown and one interception. In 2018, Kenny Pickett led his team named Panthers to ACC Coastal Division Championship where he performed as a full-time starter. Panthers was ranked at number 24 in the whole country while Pickett was in his 2018 season. Thereafter, the Panthers went on to lose 14-13 to Stanford in the sun bowl. With the start of the year 2019, Pickett made a start with 12 games.

He missed one of those games because of his injury. He scored overall 289 out of 469 passes and went to achieve 3,098 yards with 13 touchdowns and nine interceptions. This was Pickett’s first season where he acted as offensive coordinator and increased the number of passes. Pickett led the Panthers to achieve the overall record of 7-5 heading into the postseason. Later, the Panthers were selected to the 2019 Quick Lane Bowl in Detroit where the team defeated Eastern Michigan by 34-30.

Kenny completed his season of 2019 with a throw of 361 yards and three touchdowns. He also led a game-winning touchdown in the final minutes of the game. In the year 2021, the NCAA granted all 2020 fall athletes an extra year of eligibility. Pickett used this opportunity and returned to his team Panthers while beginning at quarterback in 2021. Pickett took advantage of his final year eligibility and came out to be the nation’s top player that season.

Kenny Pickett engaged his long-time girlfriend Amy Paternoster. Same as Kenny, Amy hails from New Jersey and grew up in Garden State. She is currently attending Princeton University where she is a part of her college woman’s soccer team. Amy is majoring in Economics and she is all set to wrap up-graduation in 2022. Apart from studying, she spent the previous summer working as an analyst for Goldman Sachs. Kenny announced their engagement through an Instagram post in January 2022 in which he wrote,

“Got tired of calling you my girlfriend…here’s to a lifetime with the person I cherish more than anything in the world. You make me a better person and I could not imagine life without you. I love you more forever and always!!”

Pickett is the strongest and most talented player on the team. He was nominated for the Maxwell Award, Manning Award, and other honors. After being drafted by the Steelers, Kenny is set to receive a signing bonus of $8.7 million while his base salary would be $705,000 with a $2.9 million cap number. With all these numbers, his total value is estimated at $15.9 million.