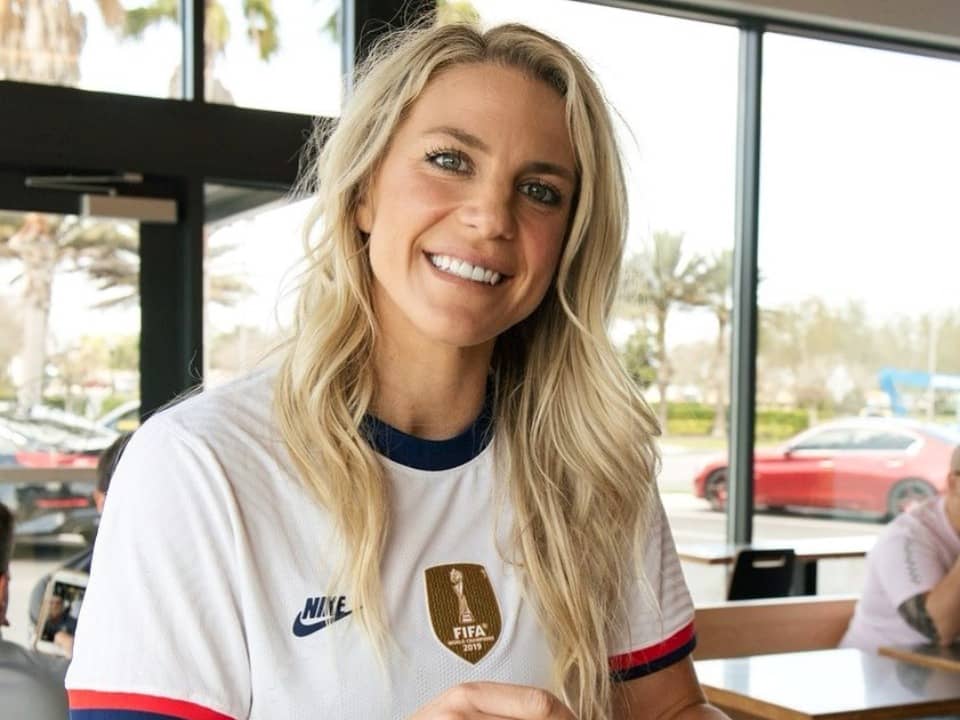 Julie Ertz devoted her heart and soul to play soccer and has been playing it passionately since her childhood. She is an American professional soccer player and is committed to the Chicago Red Stars of the National Women’s Soccer League and also plays for the United States Women’s national soccer team. She is a youthful player and has won 9 state titles and many more accomplishments and also got lucky to become the team captain at Sereno Soccer Club.

Julie Beth Johnston is her birth name and was born on 6th April 1992 in Mesa, Arizona, United States. She is a daughter to Kristi and David Johnston. Her father also played football at Louisiana State. She grew up sharing her childhood memories with her sister, Melanie Johnston, a soccer player, played for the 1990s. After her marriage, people knew her as Julie Ertz. Julie comes from a sports-centric family, so it’s in her genes to become a successful athlete.

Julie is a passed-out student of Dobson High School, Mesa. There, she served as a student athletic trainer voluntarily throughout the 4 years she spent there from 2006 to 2010. After her completion of high school, she continued to gain more knowledge and enrolled in Santa Carla University, where she majored in communications alongside playing as a midfielder for the school’s women’s soccer team called ‘Santa Carla Broncos’.

Julie was introduced to soccer through her local AYSO region. She had since then grown her career in leaps and bounds. Julie along with her sister played soccer for the Sereno Soccer Club in Phoenix. At first, she played on the club’s under-13 team from 2004 and later moved to the under-19 team. She left the club in 2010. In the following years, the soccer player never gave up or slowed down and as a result, earned many more accolades. During her collegiate soccer career, she appeared in 79 games, scoring 31 goals with the Broncos.

On 17th January 2014, the Chicago Red Stars picked her up in the year’s NWSL College Draft, with 3rd overall pick in the 1st round. She made her first debut with the team on 19th April 2014, where she scored the only goal of the match defeating the Western New York Flash in the 59th minute. In the 2017 season, Julie played as a midfielder for the first time and scored the only goal which earned her team a 1-0 victory over FC Kansas City. Ertz went on to play at the international level in the youth national teams, senior national team, 2015 FIFA Women’s World Cup, and 2016 Summer Olympics.

Her 2018 season debut match was postponed due to her knee injury but she helped Chicago and led the team to qualify for the playoffs for the 4th consecutive time. However, they lost at the semi-finals straight 4 times. Anyways, she secured a spot in the NWSL Second XI. Ertz started the 2019 season with full energy while appearing in 16 games and had a crucial role in leading the team to their first appearance in the NWSL Championship. Unfortunately, the team lost at the finals against North Carolina Courage.

Glancing her international career, she was the captain of the US national team, the winner of the 2012 CONCACAF U20 Women’s Championship, and the 2012 FIFA U20 Women’s World Cup in Japan. She made a classic senior debut against Scotland and secured a 4-1 win. During the 2015 Algarve Cup, she started 3 matches and scored her first international goal defeating France. In early 2017, coach Jill Ellis shifted her from centre back to defensive centre midfield, she excelled at the new position. Ertz won US soccer’s Female player of the year award in 2019.

In March 2020, Julie Ertz played her 100th match for the United States in a 2-0-win defeating England at the first ‘SheBelieves Cup’. However, recently she suffered a knee injury and is in danger to miss out on the Olympics in Tokyo. The USWNT is thinking to replace and fil in her place, if she does not recover soon. It is known that Mesa natives, Julie Ertz along Jagger Eaton are about to join the Chipotle celeb-inspired menu. Julie will be seen starring in Chipotle’s first-ever national Tv ad featuring a professional athlete. The ad will air on 5th July 2021 during the US Women’s national game against Mexico.

The sports girl took vows with the love of her life Zach Ertz, who is an American professional football tight end and as of 2019, plays for the Philadelphia Eagles of the National Football League. The couple first saw each other at a Stanford baseball game at Klein Field in 2012 and initiated dating. After four years of a strong relationship. Zach proposed to Julie on 26th February 2016 at the same place where they first met. Later got married on 26th March 2017. They got married at a ceremony held outdoor at the Bacara Resort and spa, Santa Barbara, California. The ceremony was attended by the couple’s family and friends and also by several of Julie’s national and NWSL teammates.

Most of the chunk in her worth comes from the professional soccer career, she is evidencing. After naming numerous awards, titles, and achievements, she has been gathered a decent sum of income in her bank balance. Her estimated worth is $3 million, which includes all her assets and properties. She is reliable on the income; she earns through endorsements and advertisements. Winning a massive number of matches, she also has earned a lot through prize money, which is very smart of her to donate a huge sum of it for welfare.