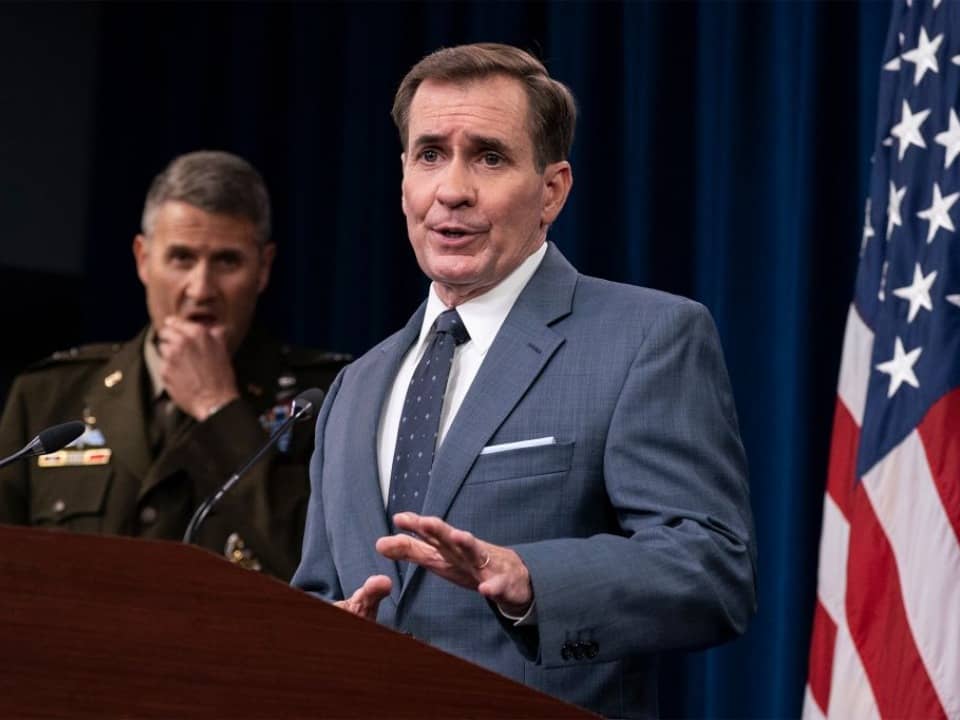 Rear Admiral John Kirby is an American politician and a retired Admiral in the US navy. He is famously known as the Press secretary for the US state department of Defense and is currently serving as the Assistant to the Secretary of Defense for Public Affairs.

John was born in the year 1963 but the exact date of his birth is unknown. Born in a Chritsian family, he spent earlier days of his childhood in in Saint Petersburg, Florida, USA. He has not shared much about his family and parents and is also not known to have any siblings. John completed his high school graduation from St. Petersburg catholic high school in 1981 and went on to attend the University of South Florida in Tampa, Florida. He graduated in the year 1985 with a Bachelor’s degree in History. John further went on to pursue his master’s in International relations from Troy University and also pursued Masters’s in National security from Naval War College. He also attended Officer Candidate School and completed it in 1986.

John started his career as a surface warfare officer in the US navy in 1986 and was later positioned as public affairs officer. He served at sea abroad at the USS Forrestal aircraft career and the USS Mount Whitney command and control ship. John also worked as the editor in chief of the Navy’s flagship monthly magazine. He also became the Commander of US naval forces in Europe, chief of Naval operation, and as a special assistant for public affairs to the chairman of Joint chiefs of staff. He also served as the deputy assistant secretary of defense for media operations. In 2012, he became the rear admiral(lower) and started serving as the US navy chief of information (CHINFO), and served as the principal spokesman for the Department of the Navy.

In 2013, he was appointed as the Pentagon Press Secretary and by 2014, he was promoted to the Rear admiral position. The same year, he was announced as the new spokesperson for the US department of state, and the same year, he retired from the military. He held the position of Spokesman of the US state department as well as of the Assistant to the secretary of defense for public affairs from 2015 to 2017. Kirby then started working as a military and diplomatic analyst for the CNN network in 2017 and is also currently working at the same position as of 2021. He was recently appointed as the Pentagon Press Secretary for the second time in Biden’s administration.

John is not known to be on many social media platforms but has a well updated LinkedIn profile for maintaining professional connections. He is also known to be on Twitter since 2017 and currently has 23.6k followers.

John is currently married to his wife Donna Kirby. The couple has not shared much about their married life but they are cherishing their marriage for more than 20 years. He also has a daughter named Meghan McDowell who was Anorexic and suffered from depression for over 6 years. He and his wife together helped Meghan overcome the disorder and she is now healthy. She got married in 2012 and is also a mother. He is currently settled in Alexandria, Virginia with his wife and family.

Being a Politian, John has been involved in a lot of controversies when he has been in news for his opinions and words. In 2014, he was called out as an “idiot” by John McCain after he contended that the US was winning the war against Iraq and Syria. A few years later in 2016, he came into the news after he defended Saudi Arabia’s intervention in Yemen which caused spur among the media and public.

John has been working as a naval officer as well as a politician for several years. He has held many important positions and has earned a lot of wealth. His net worth as of 2021 is estimated to be around $2million.