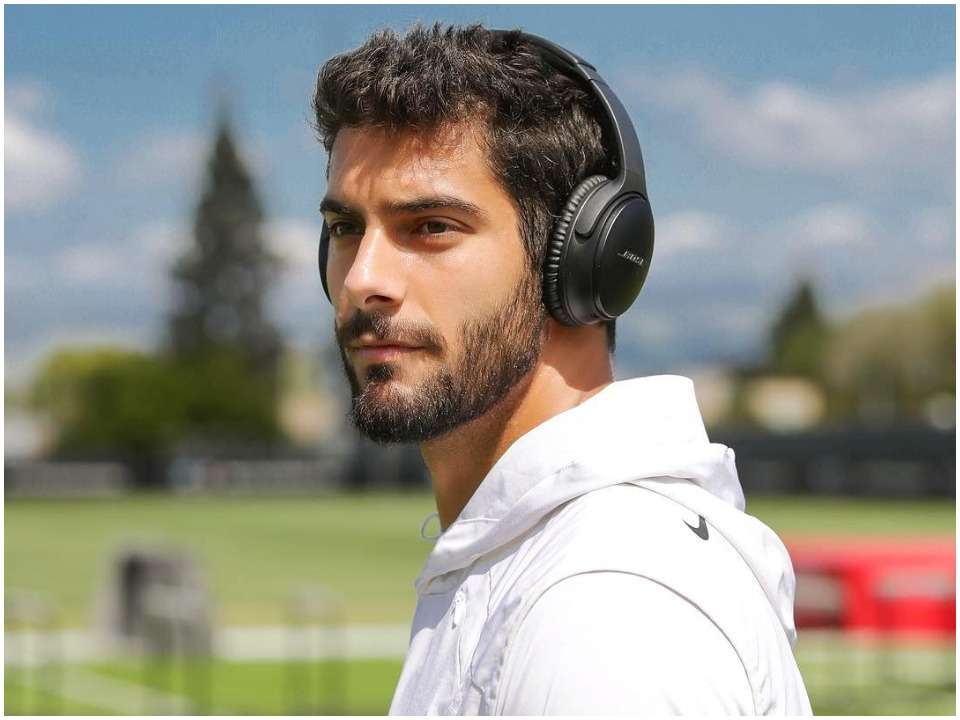 Jimmy Garoppolo is also nicknamed Jimmy G is an American football quarterback who plays for the San Francisco 49ers of the National Football League (NFL). Previously, he played college football at Eastern Illinois where he set school records for the career passing yards and touchdowns while winning the title of Walter Payton Awards as a senior. Jimmy Garoppolo was selected in the second round of the 2014 NFL Draft by the New England Patriots. Earlier, he spent four seasons as Tom Brady’s backup and later became part of two Super Bowl-winning teams.

Jimmy was born and brought up in Arlington Heights, Illinois. He is one of the four sons born to his parents named Denise and Tony Garoppolo Sr. His father Tony is a retired electrician. Jimmy is the third of all four sons. His older brothers are named Tony Garoppolo Jr. who is an architect, Mike Garoppolo who is a teacher. Also, he has a younger brother named Billy Garoppolo. All the brothers belong to a tight-knit big Italian family from the side of his paternal grandparents. Jimmy’s grandparents Anthony and Rose Garoppolo were both Italian immigrants while his maternal grandparents Theodore J. Malec and Harriet D. Seidel were both of Polish and German descent respectively.

Jimmy Garoppolo went to Rolling Meadows High School in Rolling Meadows where he played as a quarterback and linebacker for the Mustangs football team. He played overall 19 games while being a quarterback during his junior and senior seasons. He passed for 3,136 yards and 25 touchdowns. Once in his interview, Jimmy stated that Baseball was his first love when he was a kid. Later, he became a two-star recruit who was all set to accept the offers of football. He became committed to Eastern Illinois over offers from Illinois State and Montana State.

Jimmy Garoppolo played football for the Eastern Illinois Panthers from 2010 to 2013. In the first year, he started with eight games, ran for 1,639 yards with 14 touchdowns, and earned All-Ohio Valley Conference Newcomer Team honors. He completed his first year for the Panthers while being guided under the coaching of head coach Bob Spoo. Jimmy went to start every remaining game during his time with the Panthers. He ran for 2,644 yards, 20 touchdowns in 2011, 3,823 yards and 31 touchdowns in 2012, and 5,050 yards and 53 touchdowns in 2013.

Not only this, he broke the school record and went on to achieve the career-high pass completion that was previously held by the former Dallas Cowboys quarterback Tony Romo. Jimmy Garoppolo played overall six games in the rookie season of 2014 and completed the season with 19 out of 27 passes and 182 yards with one touchdown and 101.2 passer rating with 10 rushing attempts for 9 yards. In 2015, Jimmy appeared in five games and completed the season with four passes for 6 yards and a 39.6 passer rating for the season.

On 31st October 2017, Jimmy was traded to the San Francisco 49ers in the 2018 NFL Draft. In 2018, while playing for Week 3 against the Kansas City Chiefs, Garoppolo finished with 251 passing yards with two touchdowns before leaving the game with a knee injury in the left side. Later, it was revealed that he was suffering from an ACL torn because of which he had to end the whole season without playing for any other game. He was later put on the sidelines and made the overall records for the 49ers with 4-12 points. In 2019, he returned to the field for the 49ers’ seasons 2019 while playing against the Tampa Bay Buccaneers.

He rushed for 166 yards, one touchdown, one interception, and an overall score of 31-17 with the victory in hand. JImmy played 15 games in the season 2021 while missing two games due to injury and finished the season with the throw of 3,810 yards, 20 touchdowns, 12 interceptions, and three additional touchdowns while finishing for 49ers’ with an overall record of 10-7. Garoppolo played in 15 games in the 2021 season, missing two games due to injury, threw for 3,810 yards, 20 touchdowns, 12 interceptions, and rushed for three additional touchdowns as the 49ers finished with a 10-7 record.

Jimmy possesses a long history of dating Alexandra Rose King and also Kiara Mia. For now, it seems as if he is focusing on his career rather than anything. Back in those days when he was the starting quarterback for Eastern Illinois University, Jimmy had a girlfriend. He fell by the side of the famous porn star Kiara Mia. They were often spotted and seen together in the summer of 2018. But, they both appeared in front of the screen as if they were friends. They went on to have leisure time together and spend a few dinner nights together. After a long time, Jimmy has not been seen with any other girl. Since his relationship with the 40-year-old Kiara Mia ended, the boy seems to be focusing on his postseasons rather than anything.

In 2014, Jimmy Garoppolo signed a four-year contract with the Patriots with the signing bonus of $853,744 and $3,483,898 as the guaranteed amount for the contract. On 8th February 2018, he agreed on the terms with a five-year contract with a worth of $137.5 million. At the time of signing the contract, it was the largest contract in NFL history that was made on the annual basis surpassing the Detroit Lions quarterback Matthew Stafford. He was guaranteed $90 million for the first three years, which was also the largest amount or deal in total in NFL history.