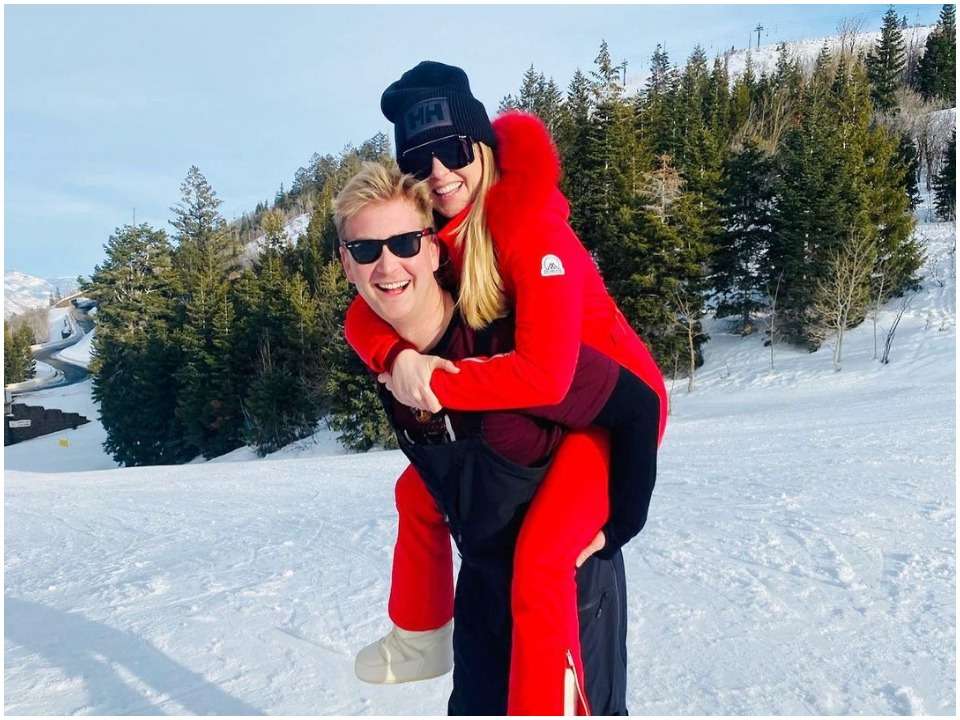 Hillary Vaughn is working for Fox Business Network as a correspondent who has gained lots of popularity in a short span of time. She has tried her hands at various media outlets, including Fox 13 in Tampa, Fox 2 in Detroit, Fox 5 in Washington DC, Fox News, Yahoo Finance, and FOX 32 in Chicago among others. She is best known for a few of her television shows on the channels of media outlets including The Claman Countdown (2008), Making Money with Charles Payne (2014), and Mornings with Maria Bartiromo (2014).

Hillary and her loving husband Peter Doocy tied the knot back in 2021 in one of the small ceremonies in South Carolina. The pair came into focus when Doocy’s father, Steve Doocy shared the pictures of their wedding on Fox & Friends on the morning of 26th April 2021. Apart from her relationship, she quite often gets the limelight because of the show “Fox News Sunday” in which she reports about current affairs across the world.

A native of Los Angeles, California, Hillary was born on 10th June 1989. As far as her family members’ and parents’ information is concerned there are no details available at the moment. If we take a look at her education then she enrolled in a Christian boarding school from where she attained basic studies. Later she earned a degree in Broadcast and Journalism and Communication in 2010 although, the exact college name isn’t available.

Hillary Vaughn is currently pursuing her job at FOX Business Network which she joined in 2016. She is serving her correspondent responsibilities in Washington, D.C. During the 2020 presidential election cycle, Hillary had to travel to different states to focus on her reporting on the matter of elections in each region. She has performed a few of the on-the-ground reporting of Des Moines, Iowa, and was featured on FOX News Rundown’s “American Dream Series. Before joining Fox Business Network, Vaughn was a member of the second class of the Junior Reporter Program of FOX News.

She was practicing her on-ground reportings while being stationed in Manchester, N.H. she officially became a reporter with Fox Business in 2016 and since then she has traveled throughout the country for live reporting covering various topics like President George H.W. Bush’s funeral services and other political events. Hillary Vaughn has worked professionally at various platforms including WTVT-TV in Tampa, Florida, KTBC-TV in Austin, Texas, WJBK-TV in Detroit, Michigan, and other media outlets based in Washington, D.C, Chicago, California, and Pennsylvania.

Hillary and her beloved husband, Peter Doocy exchanged the rituals of marriage in one of the beloved hotel brands across the country, Laguna Beach. They tried their knot in Palmetto Bluff, South Carolina, and Montage resort. Based on the pictures of them, it seems that the couple has been together for 4 years. Back in March 2017, the couple posed together with two others in the middle of them while watching a Villanova March Madness game. Apart from this, the couple has also kept their marriage life private as it was attended by only 18 people, according to Doocy’s father.

Thymus invited only a few of their close friends and relatives while celebrating the most important day of their life. Also, it seems as if Doocy and Hillary wanted to exchange the ritual of marriage sooner but the pandemic hit the world and the web a few months later. The original date was rumored to be of January 2021 but things changed and they pushed their wedding date. However, it worked for the couple and they are living a blissful life while being together.

According to various sources, it seems as if Vaughn is earning a little higher than her beloved husband Peter Doocy. The Fox Business correspondents have together made the highlight back in 2021 because of their marriage. Hillary seems to earn an estimated amount of $1 million as her net worth, while her husband earned a net worth of somewhere around $500,000. Whatever it is, both personalities work together, earn together, do hard work together, and are together making their marriage a successful journey.