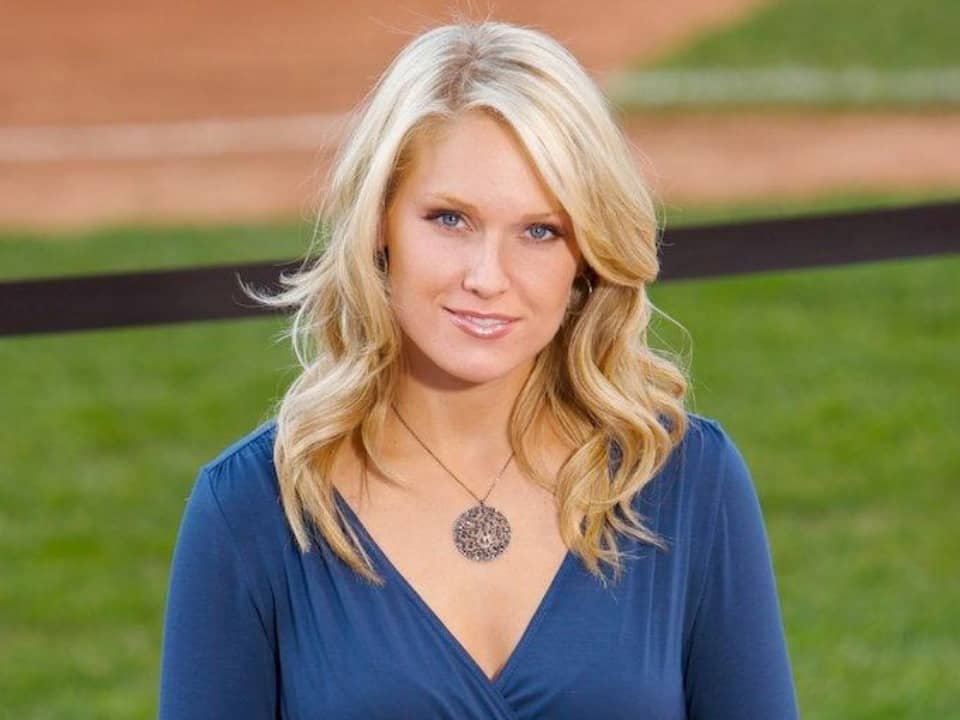 Heidi Watney is an American sports broadcaster and reporter currently working at MLB. She has past experience working at the New England sports network as well as Times Warner Cable Sports Network.

Heidi was born on 19th May 1981 in Fresno, California, USA, and is currently 40 years old. She was born to her parents Paula Watney and Mike Watney and is also known to have 2 siblings brothers named Josh and Dusty Watney and a sister named Kelly. Her father is known to be a golfer but not much is available about her mother. Her brother dusty passed away in 2018 due to Prader-Willi syndrome. She also has a famous cousin Nick Watney who is a professional golfer.

She was interested in fashion and hosting since she was a child. Heidi has completed her high school education at Clovis West High School in Fresno where she was a national merit scholar and later went on to attend the University of San Diego for college studies. She graduated in the year 2003 with a bachelor’s degree in Communication and media studies.

Heidi started her career immediately after her graduation in 2003 and started working at KMPH fox 26 as an anchor in Fresno. She worked at the job for 4 years as a morning traffic reporter until she left to work at New England Sports Network in 2008. Heidi worked as a Red Sox Reporter in-game as well as post games. She worked there for 3 years and left in 2011. Later she joined Time Warner Cable Sports Network where she worked as a reporter for LA galaxy soccer games but soon left in the same year to work at MLB Advanced Media in 2013.

She has been working with MLB for the past 8 years as a host and reporter and is famously known to be a host of the show Quick Pitch. Heidi appeared in other shows for MLB networks like the Hall of fame Election, WBC roster classic and MLB network social media awards to name a few. She has also been featured in the MLB videogames The Show 19, 20, and 21 as a sideline reporter. Recently she was part of the All-women broadcast at MLB along with Lauren Gardner, Sarah Langs, Melaine Newman, and Alanna Rizzo which was historic and changed the outlook of all men heavy broadcast teams.

Heidi is currently married to her husband Mike Wickham, director of baseball operations in Miami Marlins. The two got married in 2014 and have been together ever since. They went to Bora-Bora or honeymoon after their marriage. Later in 2018, she gave birth to her son named Jaxon Wickham. Heidi currently has 65.1k followers on her Instagram account and has also an active account on Twitter since 2009 where she currently has 144.5k followers. On her Facebook page, she currently has 8.8k followers.

Heidi has been working as a host and reporter for several years and has worked with famous media and sports houses through which she has earned a lot of wealth. Her net worth as of 2021 is estimated to be around $2million including that of her husband.

Heidi is outgoing, enthusiastic, and has a strong personality well known for her work as a host and reporter for MLB for the past several years. She has presented herself as an excellent reporter at work while also being a caring mother and wife at home. Heidi is a perfect example of beauty with brains and has managed to achieve the perfect balance in life. She has much more in store for her and we wish her luck for new opportunities.