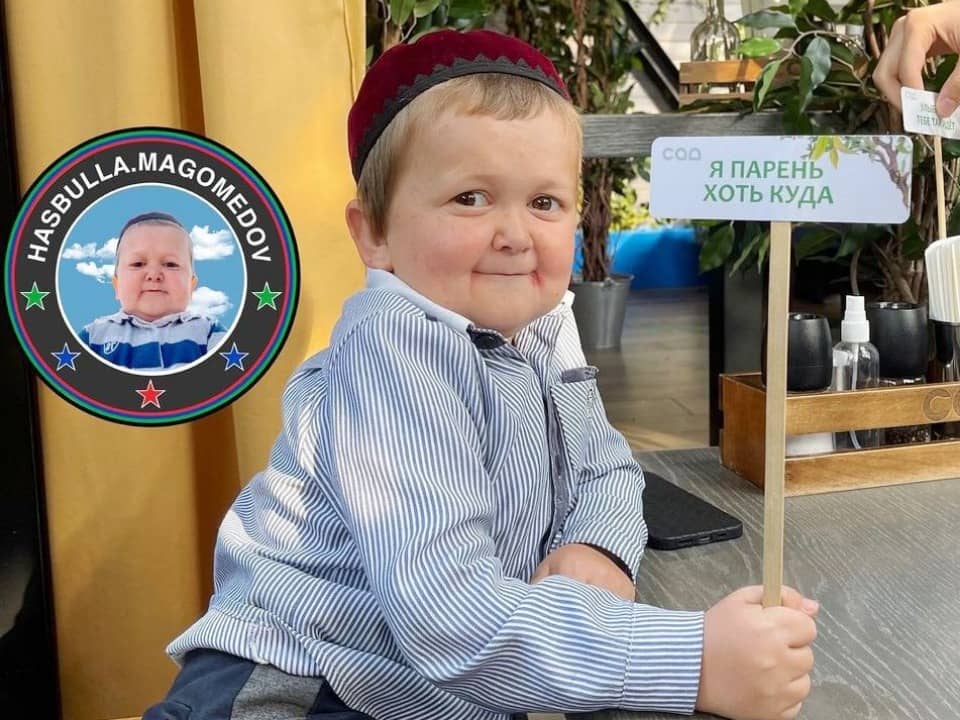 Hasbulla Magomedov is a TikTok star and blogger from Makhachkala, Russia. He was dubbed “Mini Khabib” after fellow Dagestani Khabib Nurmagomedov, the UFC star. Before his fame skyrocketed, Hasbulla began posting videos on TikToks for fun and became famous after posting a video of fighting with singer Rozik. Nowadays, he is getting more and more popular on social media, and increasing his popularity so does his fan following as well.

Hasbulla Magomedov was born in 2003 in Dagestan, Russia, and belongs to the Islamic religion. Although his appearance doesn’t quite judge his age because he looks like a baby with high pitched voice. He is 3 feet 4 inches tall and has dwarfism. Ever since his childhood, he likes cars and everything about it. He decided to be a truck driver or trade business because of his love for cars. Hasbulla loves drifting especially the sound it makes. In one interview he did mention his late father Abdulmanap Magomedov. Hasbulla became famous recently and so information about his family and education isn’t available to the general public. His primary ambition is to start his own business, complete his studies, learn the Quran, and become a theologian and legal scholar. He is 18 years old so he may have completed his high school education by now.

After several videos of Hasbulla went viral, he became a cult hero in the MMA community. After recreating Khabib Nurmagomedov’s iconic UFC weigh-in, he earned the moniker Mini Khabib. One of his most popular videos is his pre-fight “press conference” with fellow social media personality Abdu Rozik. Rozik, 17, suffers from a similar growth disorder, which is thought to be GHD (Growth Hormone Deficiency). Because of the two men’s online popularity, Chechen MMA fighter Asxab Tamaev is said to be organizing a mixed martial arts fight between them. The fight, according to Uliana Podpalnaya, head of the Russian Dwarf Athletic Association, was “unethical and wrong.”

In a statement, she stated that the fight was only intended to make people laugh and that it would only be taken seriously if dwarf martial arts became a Paralympic sport. Dagestan is a very close-knit community, so it’s not surprising that everyone knows everyone else. Hasbulla, on the other hand, is best friends with some of the world’s best MMA fighters, including former UFC lightweight champion Khabib Nurmagomedov.

Many times, people mistook him as the son of Khabib Nurmagomedov as he posts about Hasbulla frequently on social media and looks like they resemble each other. Hasbulla adores oatmeal and will punish anyone who disrespects it. During their press conference, Abdu rozik referred to Hasbulla as “oatmeal head,” which enraged “Hasbik,” who challenged his opponent to an immediate fight. Hasbulla also threatened Abdu with dire repercussions for disrespecting his favorite meal.

Looking at him people would definitely wonder if he has any kind of disease that causes this? However, he isn’t suffering from any kind of disease but his height due to his genetic disorder which he has had ever since his birth. It is also called dwarfism where one looks like a child but with a high-pitched voice because his growth is prevented. Apart from this, it can also cause other physical issues such as bowed legs or even an unusually curved spine. This happens because due to dwarfism, the body can’t produce sufficient hormones which are responsible for the overall growth of the body.

Hasbulla is single right now and is not in a relationship currently. He is probably looking for someone with whom he can start a whole new life. The news will be updated if his status is changed in the future regarding his personal life.

Hasbulla Magomedov is an MMA fighter and went viral in 2020. He is a known internet sensation, TikToker, and blogger. So, most of his income comes from his profession and promotional works. As of 2021, his net worth is around $200 K thousand.