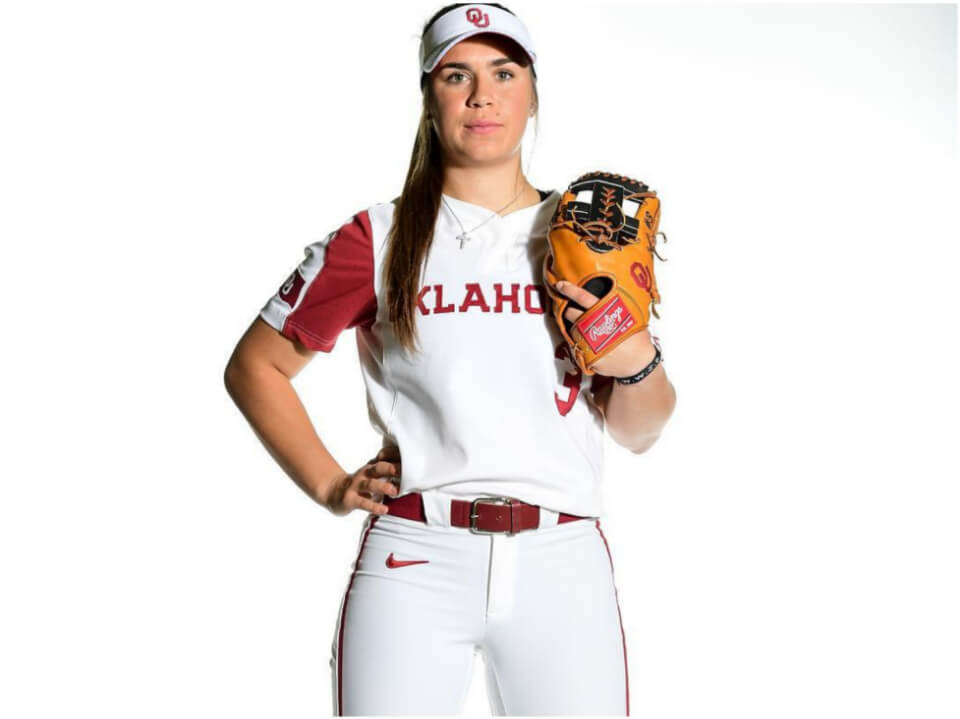 Grace Lyons is an American personality who is committed to playing for Oklahoma Sooners Women’s Softball. She has now become a senior and has been gracing her career or looking forward to other achievements.

Grace Lyons is around 20 to 25 years old as she has not given the exact date of birth. She was brought up along with her one sibling named Max by her loving and caring parents named John and Erin Lyons. Her father John served as a hockey player at the Air Force Academy. Grace chose Oklahoma University over other various offers from the side of Arizona, Florida, Oregon, UCLA, and Alabama.

Grace was born in Bitburg, Germany but later had to relocate to Peoria, Arizona, where she was nurtured by her loving parents till adulthood and where she developed the practice of becoming a softball player in the field. She was brought up in an environment of games because her father was a player of his time. Growing up as an athlete, Grace saw her faith developing and inclining towards softball throughout her time in high school.

Grace Lyons is one of the important Oklahoma stars who helped Oklahoma Sooners to maintain the record of 30-0 at the start of the year 2022. She has raised an impactful personality who always had her gloves on while playing for the field after arriving in Norman. She began with 63 games during her freshman year at Sooners and thereby continued to maintain her career throughout the different programs. In May 2022, she turned out to be a senior and had to spend an outstanding career holding an average of .420 with 12 home runs. Now, she looks to lead the Sooners to a championship and develop her faith throughout her performances.

During her high school years, Grace began her career while enrolling herself for Tony Rico’s Firecrackers out of Huntington Beach, Calif. During her time on the team, she led her team to appear in the 2017 Canada Cup Championship and the 2017 TCS Fireworks Championship.

She earned the titles like NFCA Second-Team All-Region in 2016 and has remained a three-time all-region and all-division selection. During the time, she was committed to playing for Sandra Day O’Connor high school, where she led her team to the 6A State Championship in 2016 and where Grace appeared as the team captain. The team played for a shortstop, second base, and centerfield and Grace hit a .526 average in 2017 with 47 runs, 35 runs batted in, 7 home runs, 9 stolen bases, 3 triple stolen bases, etc.

Grace began with a total of 63 games for Oklahoma at shortstop. She earned the position of second on the team with overall 54 assists and 10 HBP. Grace led the team in six games with multiple RBI and 5 games with multiple hits. She had her first home run in a 2-for-2 performance while standing against San Diego State. She had her first career grand slam while having her team standing against Hofstra, had three runs for the team while standing against Northwestern, and closed the season at OU with the last three games and having the season’s long-hitting streak.

During her sophomore year, she earned the title of Academic All-Big 12 and after beginning the season, she started in all 24 games for the OU at shortstop. Again, she held the position of second on her team where she made a record of 40 assists, 23 RBIs, and 3 HBP. She had seen her seven games passed with multiple hits and 5 games passed with multiple RBIs. She finished her sophomore season with a slash line of .370/.448/.671.

Grace Lyons is romantically committed to her long-time known partner named Michael Turk, who is an American personality and is committed to playing football for the Oklahoma Sooners. Although the couple has been dating for many years, there is no detail on their relationship timeline available on the internet. However, seeing Grace’s Instagram feed, it seems that the pair are enjoying their long-time friends and have been together for many years. The couple has not discussed the things related to their relationship anywhere and has been investigated to live together for years.

Grace must have associations with her sponsorship companies and various other endorsing companies. She must be connected with various commercials and other TV programs to help her to go forward in her softball career. Therefore, we can predict Grace’s estimated net worth somewhere around $500,000 to $1 million.