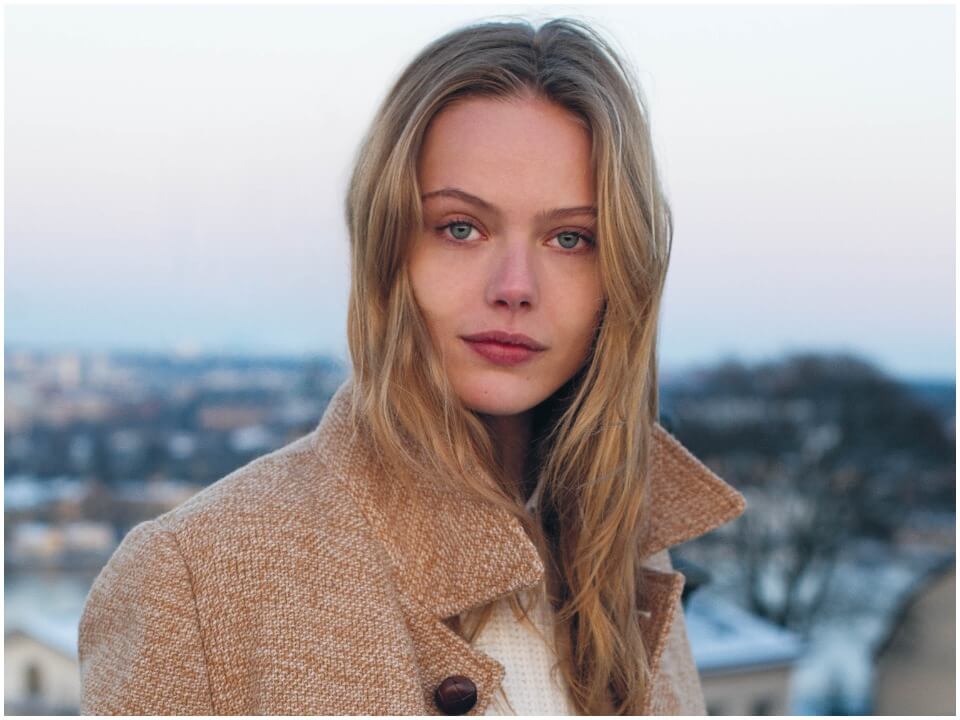 Frida Gustavsson is a Swedish Model and Actress who works under IMG Models, Traffic Model, Mega Model Agency, Donna Model, and Stockholmsgruppen. In the Spring 2010 fashion show, she was the fourth most requested model behind Kasia Stuss, Liu Wen, and Constance Jablonski. Next year she won Elle Sweden’s Model of the Year Award. Currently, she is in limelight for her work in TV series named Vikings: Valhalla which will be released soon.

After studying she wanted to move to New York to become a fashion stylist and know more about patterns and product design. At the starting of 2014, she showed interest in an acting career and before that she used to work as a model for IMG Models. In 2008 she started modeling with local brands and later moved to Japan to pursue the same. She walked for many top brands like Shiatzy Chen, Louis Vuitton, Chanel, Lanvin, Fendi, Christian Dior, Anna Sui, Calvin Klein, Celine, Ralph Lauren, and many other brands. In 2013 she was the new face of the Maybelline Makeup brand. In 1998 she did a small role in the Nar Karusellerna Sover TV series. From 2013 to 2019 she was seen in many films and TV series.

The title of these projects was Nina L’eau, Swoon, Arne Dahl: Efterskalv, Drom, The Witcher, and The Inspector and the Sea. She has also starred in various magazine covers like Elle, W, Numero, American, Italian, French British, German and Japanese Vogue, Crash, and other magazines. In 2020 she was seen in a short film named Unblinded as Emma and many tv series like De Utvalda and Partisan. After five years of break, she walked for Jean Paul Gaultier’s Haute Couture Spring 2020 Show. Next year she was seen in the film named Tigrar as Vibeke. In 2022 she worked in TV series named Vikings: Valhalla as Freydis Eriksdotter. Due to the covid-19 pandemic, many of her filming projects were postponed. Recently she completed filming for Dampyr where she is playing the role of Tesla.

On 30th May 2015 she got married to Hjalmar Rechlin in Sweden. Hjalmar is a photographer and they were married for less than a year and later parted their ways. The details about the same have not been shared. In June 2018 she was reported to be in a relationship with Marcel Engdahl. They are in a lowkey relationship and like to be away from the limelight.

Frida Gustavsson has earned a lot in her career mainly from the acting and modeling field. She lives a lavish lifestyle and travels to many places. According to sources her net worth has been estimated at around $1.5 million. She also earns by working in commercials and attending events as a guest.