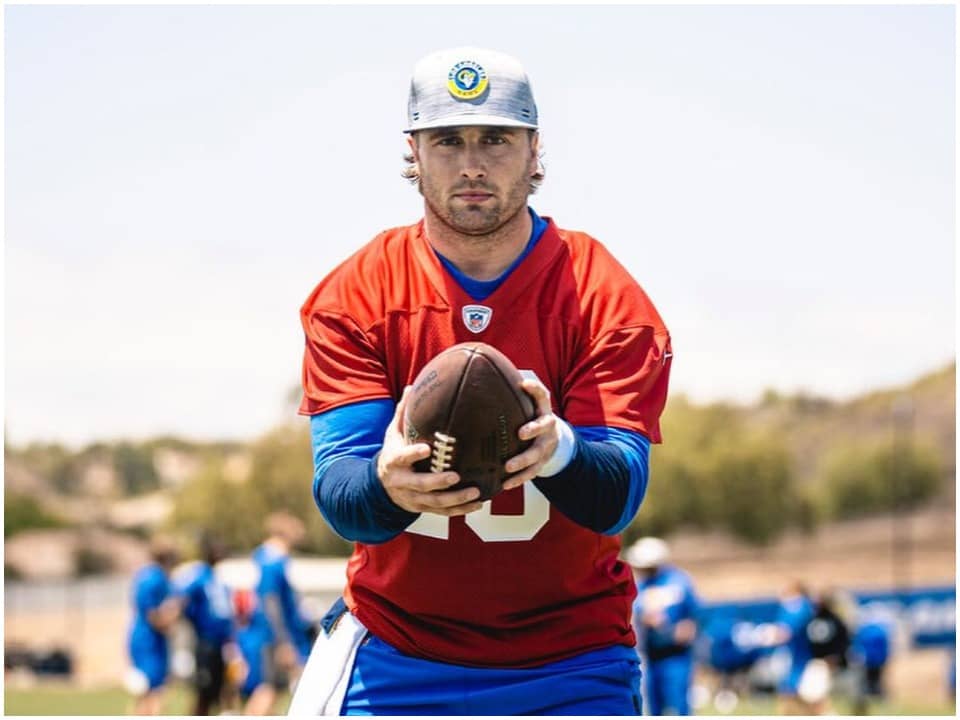 Devlin Hodges is an enthusiastic American football quarterback who plays for the Los Angeles Rams of the National Football League (NFL). He is well-known for his outstanding performances and is a passionate player, as evidenced by his matches.

Devlin “Duck” Patrick Hodges was born in Kimberly, Alabama, to Amy and Zane Hodges on April 12, 1996. From the time he was a small child, he was a highly active young man. In Birmingham, Alabama, he attended Samford University before transferring to Mortimer Jordan High School. At Samford, Hodges earned the moniker “Duck.”

Devlin Hodges began his professional career at an early age. Hodges started at quarterback at Samford for four years. He was voted the Southern Conference Offensive Player of the Year three times, and he won the 2018 Walter Payton Award after his senior season when he set the NCAA FCS career passing yardage record of 14,584 yards. Former Alcorn State quarterback Steve McNair established the previous record in 1994, but Hodges smashed it.  Following Mason Rudolph’s injury, he made his professional debut with the Steelers on October 6, 2019, in a game against the Baltimore Ravens. Hodges completed seven of nine passes for 68 yards and carried the ball twice for 20 yards in his debut regular-season game.

In the game against the Los Angeles Chargers on October 13, 2019, he earned his first NFL start. In the game, Hodges passed for 132 yards and one score while also throwing an interception. When Hodges took over for Rudolph in the third quarter of the game against the Cincinnati Bengals on November 24, he completed 11 of 14 passes for 118 yards and a touchdown throw of 79 yards en route to a 16–10 comeback victory. The Steelers head coach, Mike Tomlin, has designated Hodges the starter for the Steelers’ next game on November 26 against the Cleveland Browns. In the 20–13 win, Hodges threw for 212 yards, one touchdown, and one interception.

Hodges struggled against the Buffalo Bills on Sunday Night Football on December 15, 2019, as the Steelers fell 10–17. He threw for 202 yards, one touchdown, and a career-high four interceptions. Hodges was benched early in the second quarter against the New York Jets for Rudolph after throwing two interceptions. After Rudolph suffered a shoulder injury, he was inserted back into the game in the fourth quarter. The Steelers were defeated 10–16. During the game, Hodges passed for 84 yards and two interceptions. Hodges started eight games as a rookie, throwing for 1,063 yards, five touchdowns, and eight interceptions.

Devlin Hodges is dating Ella Baggett right now. They met at Samford University in Alabama, where they were both students. In the future, they will soon be a happy couple because they are planning to start a whole new life. They are frequently seen together on social media nowadays.

Hodges has acquired a total net worth of $780,000 through his commitment and dedication to his football career, which he has pursued since he was eighteen young. He is a person who is completely focused on his goals.