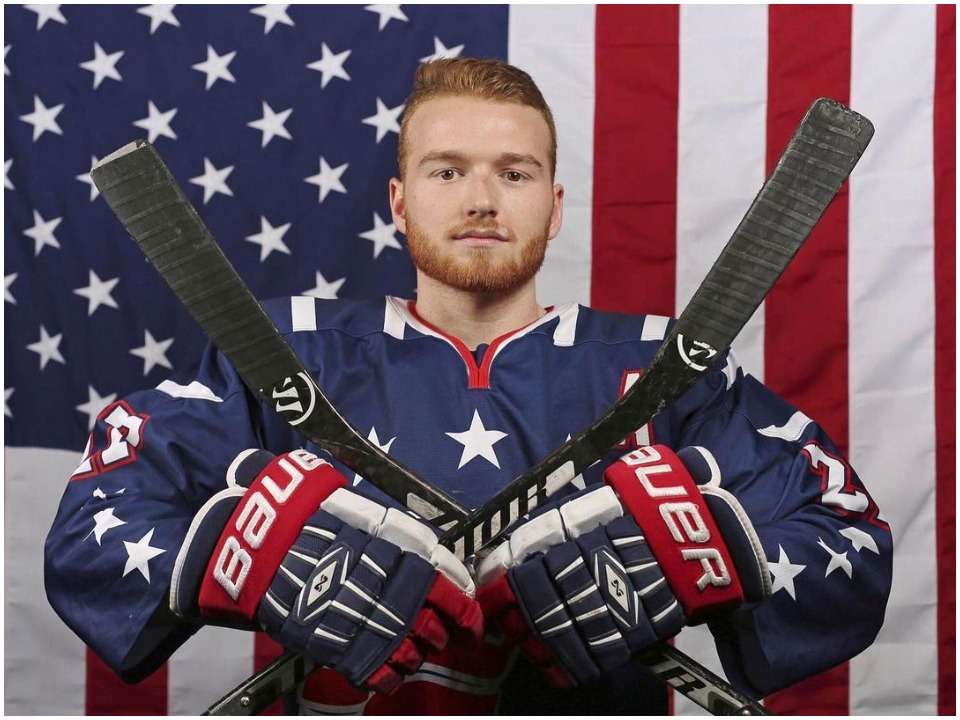 Declan Farmer is an American personality who plays ice sled hockey by profession and participates in paralympic winter games. Till now, Declan has appeared in three Paralympics (including the third one of 2022 recently going) and has received gold medals in the previous two Paralympics games. He is the recipient of a gold medal at the 2013 Winter Paralympics in the men’s ice sled hockey tournament. He has been a bilateral amputee and since the age of 9, he has dedicated his life to sports and paralympic events after he saw it succeeding in Clearwater, Florida.

Declan Farmer was born on 5th November 1997 and as of 2022, he is 24 years old. Being at such a young age, he is yet to receive many achievements and has marked a great journey till now. Declan went to the Berkeley Preparatory School in Tampa to attain his primary education and later attended Princeton University in 2020 for his college studies. In 2012 at the age of 14, Declan stood alone and prepared/made an American National Team, receiving the award of 2014 ESPY awards for being the best-disabled athlete. The following year in 2013, Declan let his team finish first while scoring eight points at the event of 2013 IPC Ice Sledge Hockey World Championships.

According to his LinkedIn profile, Declan is two times a gold medalist in the sled of hockey for the USA, where he has competed at 2014 Paralympics in Sochi and Paralympics 2018 in Pyeongchang. After his graduation in June 2020 with B.A. in Economics and a certificate in Computer Science, he has been spending his time while progressing and training full-time in Nashville for the 2022 Paralympics. With this chance of paralympic games in 2022, Declan is all set to achieve another gold medal and mark the beginning of his new journey in the field.

In addition to his preparation for the Paralympics, Declan has been serving for two elected volunteer positions. Back in 2020, he was given the position of Paralympic General Team Representative, where his work is being associated to look after the rights and interests of the current and former athletes of sled hockey for those who are wheelchaired and are disabled. Later in 2021, Declan was elected for the USA Hockey Congress for the position of Athletic Director, and who has been working for the country and its presentation at Olympics, Paralympics, and other World Championships

Declan has also remained a community hockey intern at Tampa Bay Lightning from June 2018 to September 2018. His work while being a community hockey intern was to give guidance and be a mentor for young athletes between the age of 5-15. Later in June 2019, he became a member of community hockey- coach and mentor with a similar role to the previous one, i.e, mentoring and giving coaching to young athletes. Before trying his hands in hockey, Declan intended to make his career in wrestling, tee-ball, and soccer but achieved no success in return.

Later, he joined Tampa Bay Lightning sled hockey team and started appearing at national games with the team. At the age of 14, he was able to make his first U.S. National Team. In March Paralympics 2022, Declan would be competing with 17 other competitors. He would be presenting in the U.S.A while competing against Canada, South Korea, and Russian Paralympics.

The young and exemplary personality, Declan Farmer, is committed to his girlfriend Madison Jenkins, with whom he has been seen sharing pictures on social media including Instagram and others. According to her Instagram bio, Madison Jenkins has been serving at a convenience store/supermarket. Declan has found great support in the form of his girlfriend, who is often seen sharing the platform or the seat in audiences cheering for her only man. She often praises her boyfriend’s distinctive efficiency and his appearance at nationwide or worldwide championships.

It is for sure that Declan Farmer is earning quite a good amount of money. He might have been getting prizes and cash because of his appearances and achievements at the Paralympics and other nationwide games. For the moment, Declan’s estimated net worth is nearly $3 million, including his assets from his national games, Paralympics prizes, and his career in the two elected positions for Paralympics.