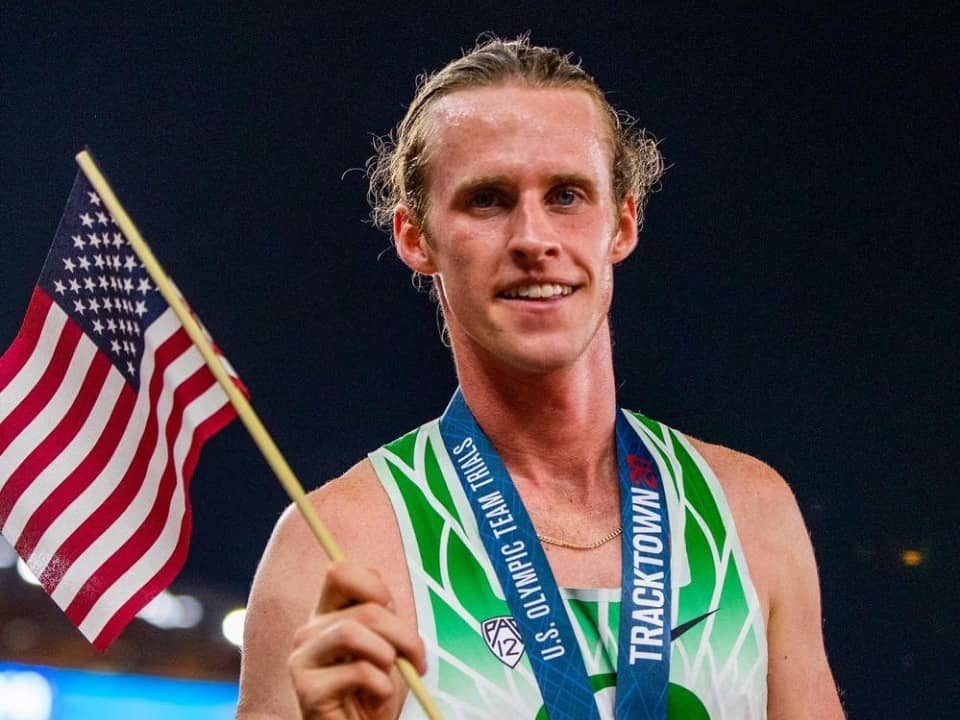 Cole Hocker is a track and field athlete who hails from Indianapolis and played as a racer for Oregon Ducks cross-country. Cole Hocker shone in the outdoor track event as Lane County reopened to visitors following the coronavirus outbreak At the NCAA Outdoor Track & Field Championships, he is a dominant athlete. He also won his first national cross-country race when he was nine years old. The Oregon athlete has had a meteoric climb from NCAA triumph to a late push for a spot on the American Olympic team for Tokyo 2020.

Cole Hocker was born on 6th June 2001 in Indianapolis and went to Cathedral High School for basic school studies. Hocker’s mother and father, particularly his father Kyle, always encouraged him to seek a career in medicine. His father is a runner and sports fanatic in his own right. Kyle Hocker, Cole’s father, did a 50-mile race at the age of 50. He also lends a hand to his son’s team daily. Hocker ran in the Foot Locker Cross Country Championships as a senior at Cathedral.

He was the champion of the Foot Locker Midwest Regional Championships. He also won the Midwest Regional of the Nike Cross Nationals. Aside from sports, Hocker excelled in the classroom. With a 3.22 GPA, he was approached by several universities. He eventually accepted a track field scholarship at the University of Oregon. Cole graduated from high school in 2019 with the honor of being named “Player of the Year.”

His athletic career began in 3rd grade at Horizon Christian School in Indianapolis, where he joined the cross-country team. Kyle, his father, agreed to be an assistant coach because he is a local teacher and then followed his son’s career through middle and high school. Cole, at nine years old, represented his Indy Gold club team at the 2010 Cross Country Coaches Youth National Championship in Lexington, Kentucky, where he won his age division in 11:19.50 over the three-kilometer race. Because he was also a math teacher at Cathedral High School, his coach Jim Nohl used the same training philosophy he used in primary school but tweaked it with a more statistical approach.

Cole began growing his long hair as a freshman at Cathedral, where he developed his hallmark closing speed, so the Sampson parallels were unavoidable when he began to win. Hocker’s feud with Centrowitz began innocently enough at a meet in California last December. Centrowitz won a low-key 5,000-meter race by.03 seconds over Hocker at the finish line in 13:32.92. The Ducks’ next generation was hot on the heels of the present heroes. With  Hocker in 2019, Teare gained a training partner who helped him climb the NCAA rankings. Hocker moved home to Indianapolis when the Oregon facility closed last spring and spent much of the summer exercising alone.

He paid a visit to Boulder, Colo., where he joined Teare for a long run on Magnolia Road at an elevation of more than 8,000 feet above sea level and stuck with the rising senior when the pace accelerated to 5:20 per mile. It was just the two of them by the finish of the race. Teare and Hocker rejoined in August and decided to stay on the track would give them the best chance of capturing an NCAA team title, so they spent the fall doing tiny time trials in an empty Hayward Field under coach Ben Thomas’ watchful supervision.

At an indoor match in Fayetteville, Ark., on Feb. 12, Teare and Hocker ran 3:50.39 and 3:50.55, respectively, to shatter the old NCAA indoor mile record of 3:52.01 set by 17-time NCAA champion Edward Cheserek. Hocker defeated Teare in the 3,000m at the NCAA indoor championships a month later on the same Arkansas track, his second national title of the day after winning the mile 90 minutes earlier.

Hocker came into the outdoor season with a lot of enthusiasm, but new challenges arose rapidly. Fans got their first look at Hocker versus Notre Dame’s Yared Nuguse, the 2019 NCAA outdoor champion in the 1,500 meters, who skipped the indoor season to assist the Irish cross country team finish second at the NCAA cross country finals. Nuguse won in 3:35.96, and Hocker finished third in 3:36.47, a personal best behind teammate Teare. He won the 1500 meters in 3:35.35 at the 2021 NCAA Division I Outdoor Track and Field Championships, outkicking NCAA record holder Yared Nuguse.

In the 5000 meters, he came in fourth with a time of 13:18.95. Hocker won the 1500m final in the 2020 US Olympic Trials, beating both Matthew Centrowitz and Yared Nuguse. He didn’t meet the Olympic qualifying time, but he was still able to compete because of his global ranking. Hocker qualified for the semifinals of the 1500 meters at the 2020 Olympic Games after finishing fourth in his heat in 3:36.16. Then, in the semifinals, he ran 3:33.87, his personal best, to finish second in his heat and qualify for the final.

Hocker may be committed because as per the reports, her girlfriend works at a local ice cream shop. However, there is no name disclosed so we assume that he loves his privacy and has not revealed anything much about his love life.

Cole is still very young and needs to do a lot more in order to make a successful career in sports. However, he got the big and best platform in form of the Olympics so he will surely gonna be a star in the future. There is no information about his net worth available.