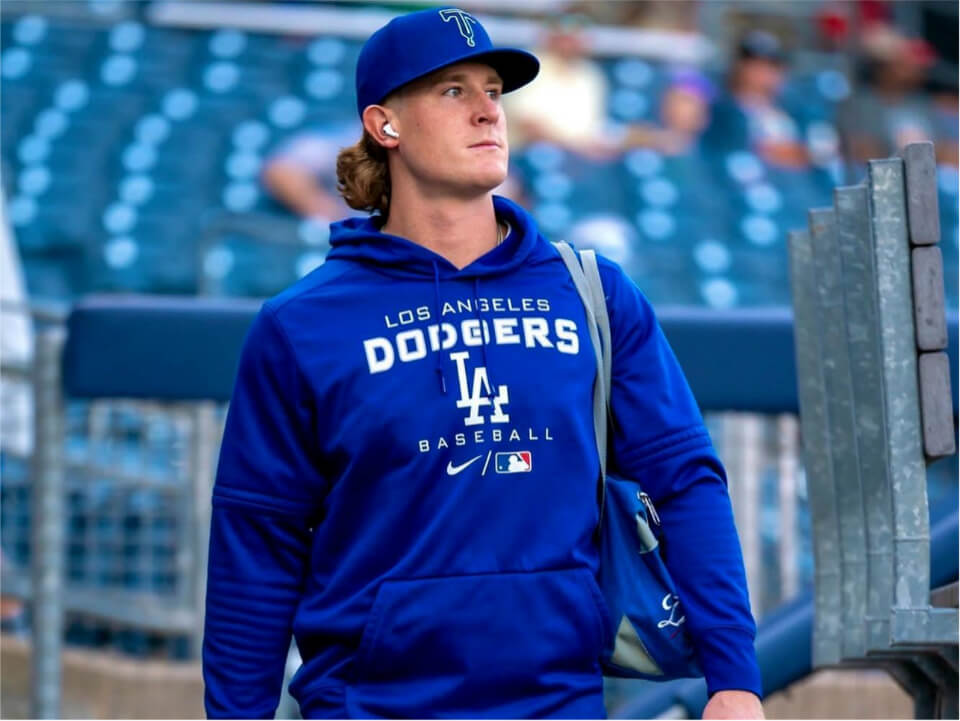 Clayton Beeter is an American personality who is a well-established baseball player. He plays as a pitcher and right-hand thrower & batsman. He is a known Texas Tech product, who is yet to be 24 in October 2022. In August 2022, he went into the news because he had been traded from Los Angeles Dodgers to The New York Yankees in exchange for Joey Gallo ahead of the MLB trade deadline.

Clayton Beeter was born on 9th October 1998, making him 23 years old as of 2021. He was brought up in Fort Worth, Texas to his loving and caring parents named Mike and Lana Beeter. He shared his childhood with his other sibling named Jaclyn (brother).

Beeter spent his four years playing baseball for Birdville High School in Colleyville, Texas. He was guided under the coaching of head coach Vance Bonner. Beeter led his team to the District Championship in 2014 and count their place in the two Bi-District Championships in 2015 and 2017. He earned first-team All-District honors during his senior season after he had a total strikeout of 106, 55 pitched innings, and 0.81 ERA. During his high school career, he ranked the 125th best high school prospect in Texas by Perfect Game. he also played football and achieved the honor of a three-year football letter winner and earned the name of the first team All-District in his freshman and sophomore seasons.

Beeter earned the honor of All-American by two publications, was recognized on the All-Big 12-second team, named to the Big 12 All-Freshman Team, and earned the honor of Academic All-Big 12 First Team. While heading into 2020 (that was cut short because of COVID) tied for 8th on the school’s career list with eight saves. He made the school book record when he had three saves during Big 12 and where he tied for ninth.

Clayton Beeter majored in Mechanical Engineering and earned the honor of Academic All-Big 12 First Team. he was ranked number 27 as the starting pitcher in the country by D1Baseball.com. He was ranked number 5 as an overall prospect in the Big 12 and earned the rank of number 53 nationally in D1Baseball.com’s conference wrap. Clayton had a career record of 2.81 ERA tied for ninth on the school’s all-time list. He had eight career saves all from 2019 and tied for eighth in the school book record. On 6th March 2020, he made the record of becoming the fourth Red Raider to strike out a Rip Griffin Park-record 12 batters in a game, while the team stood against Rice.

An Overview From Injury to Draft Season

Before the start of his first season with the Red Raiders in December 2017, Beeter underwent Tommy John surgery and later had another arthroscopic follow-up after six months. He had a satisfying season with Texas Tech and was redshirted into his sophomore season without any hurdle. He also helped Texas Tech to reach the semifinals in the 2019 College World Series, where he scored eight saves and four strong starts.

Beater was rewarded a contractual amount of $1,196,500 but he was held by the strict innings count in his first season with the club, therefore, he made his first performance after the draft in 2021, where he threw 52 ⅓ innings in 28 games, 27 of which were starts. He was drafted in 2020 but before he could head into the first day of the draft, he fell and got hurt by the multitude of injuries thereby sustained in college.

Clayton’s girlfriend’s name is Erin Burk. Both are high school mates and do not stay behind from showing their love to each other on their Instagram feed. Sometimes, Burk travels across the country to show her support to her boyfriend and Clayton Beeter also shows his love to his girlfriend on his social media thanking her for coming to his games.

Erin Burk studies at Birdville High School and she also went to Texas Tech University, receiving a BS in Kinesiology, with a Minor in Psychology in 2020. She was born in 1998 and brought up by her parents named Joan Burk and Randall Jon Burk. Erik is one of the four children born to her parents and she shared her childhood with her two brothers and one sister. The name of the brothers are Nathan Burk and Tyler Burk, and the sister is named Alli Burk.

Clayton Beeter is surely earning well because of his baseball games. Also, he was offered a $1 million contract during his MLB draft. If he would continue to stay committed to his games like earlier, he would surely earn as high as $5 million.