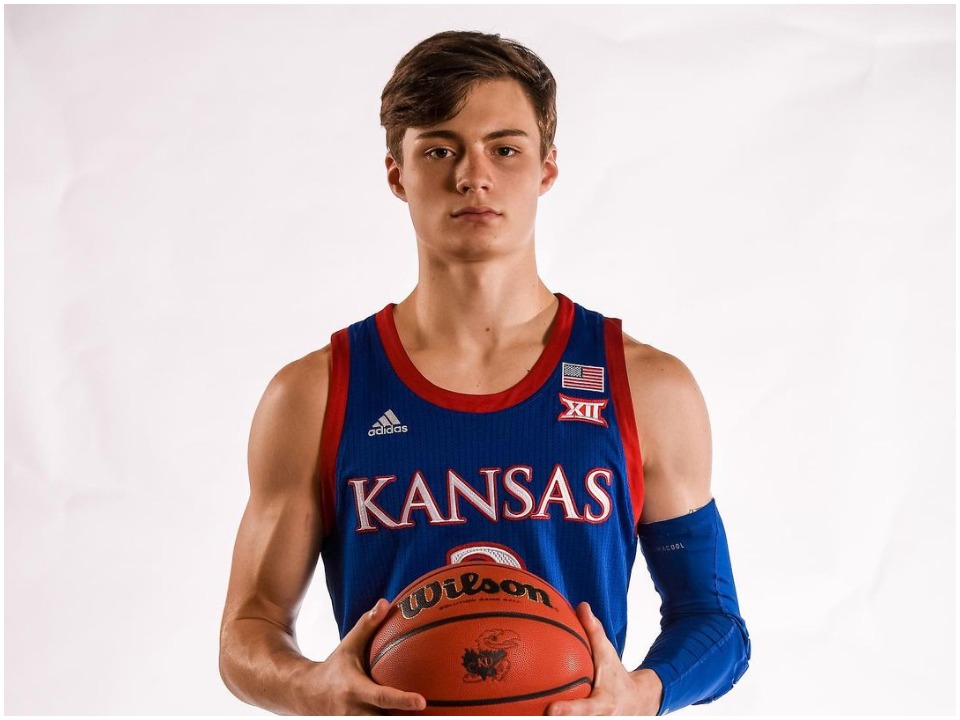 Christian Braun is an American personality who is a college basketball player committed to the University of Kansas. He is one of the exceptional players on the basketball team who played nearly 61 games in the first two seasons 2020 to 2021 at Kansas. Braun achieved the honor of All-big 12 first-team honoree in 2020 and was also nominated as Academic All-American. He is the kind of person who belongs to an athletic family, so being on the basketball team was not a big decision for him.

Christian Braun was born with the name Christian Nicholas Braun in Burlington, Kan. he was brought up by his loving and caring parents named Lisa and Donny Braun. He was not alone but rather brought up along with his two other siblings named Parker and Landon. His one brother named Parker played basketball for two seasons at Missouri and is now serving at Santa Clara. The father Donny Braun of three adult children was a former walk-on at Kansas and was later transferred to Saint Louis.

On the other hand, the mother of Braun’s family who was formerly called Lisa Sandbothe was a three-time All-Big Eight Conference selection. Christian’s uncle Mike Sandbothe played at Missouri from 1986 to 1989 and his wife Lori Sandbothe also played basketball for Missouri from 1988 to 1990. So, all of his family members from the maternal or paternal side were great athletes of their time. Christian often enjoys playing video games and golf in his spare time. He has received his education majoring in the subject of communication.

While hustling for his career in the early years of his life, Christian played basketball for Blue Valley Northwest High School in Overland Park, Kansas. As a senior, he made an average of 27.8 points, 9.3 rebounds, and 3.8 assists per game. He helped his team to lead the third straight Class 6A state title. He earned the honor of being called Mr. Kansas Basketball and Kansas Gatorade Player of the Year. From various offers from the side of Kansas State, Illinois, and Missouri, he chose to remain committed to Kansas Jayhawks men’s basketball.

Christian began his freshman years in 2020 at Kansas, while averaging points of 5.3 and 2.9 rebounds per game. He earned the honor of Big 12 All-Freshman team honors. In November 2020, he made a record of career-high 30 points, four steals, and nine rebounds with a total score of 94-71 and a win over Saint Joseph’s. While entering his sophomore year, he made an average of 9.7 points, 5.2 rebounds per game. He also earned the honor of second-team all-big12 as a junior.

Christian is a young athlete, who is committed to playing basketball for the University of Kansas. Rather than having time for his love life, he is devoting his time to maintaining a career. He has developed into an athlete, majoring in the subject of communication and the honoree of All-Big 12 First Team 2020. Since the age of 6 years, he has learned and dreamed of being on a basketball field or court. He has developed himself into a kind of personality, which he often used to talk about in his childhood.

It is not like he is living his dreams, it is like he is living the dreams of the whole family, where all of his family members including his mother, father, uncle, and aunt played for Missouri. Not only this, but all his siblings have developed themselves into an athlete playing for some known teams in the country. It seems that Christian is trying to maintain his long career achievement rather than developing a love relationship with any female.