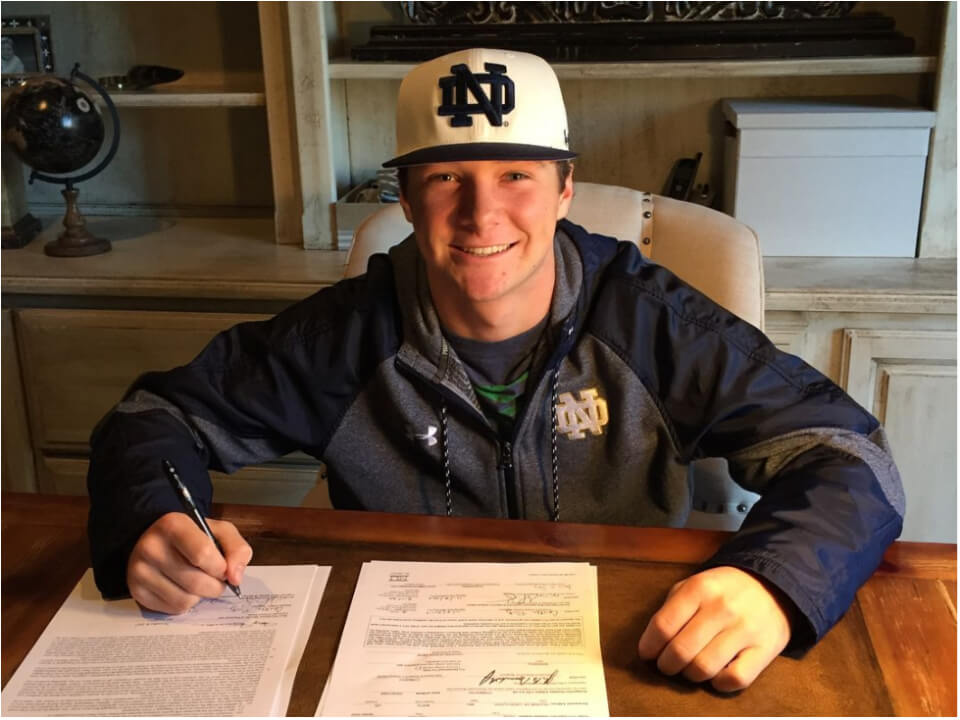 Carter Putz is an American personality and a student-athlete pursuing his academic or baseball collegiate career at the University of Notre Dame. He is a right-hand batsman and right-hand thrower and generally plays as first baseman, second baseman, and designated hitter.

Carter Putz was born on 30th September 1999, making him around 23 years old as of 2022, and was brought up in Belton, Missouri. He is a graduate student of Bishop Miege High School and received his graduation in May 2018, intending to pursue a future career in business. After completing his high school career, he earned four varsity letters in baseball and three varsity letters in football, making him two sports athletes.

During his high school games, he guided his team to a state runner-up finish in baseball where he made the record-making score of .460 average batting hits with 13 extra-base hits and 23 RBI. While playing in high school, he earned three state-level honors for football and collected 2,844 passing yards with 38 touchdowns. While being a senior, he made a career-high record of 596 rushing yards and 11 touchdowns. Putz has remained a member of the National Honor Society and received academic achievement awards with the honor of the Academic Honor Roll.

His grandfather’s name is Gary Gibboney and he also played baseball during his time and swam at Ball State. Carter Putz’s father’s name is David Putz and his mother’s name is Jennifer Putz and was brought up along with two brothers named Jude and Rohan.

During his freshman year in 2019, he began by playing for 52 games and led all freshmen on his team to start with a total of 47 games between second base and designated hitter. He was named fourth on the team and made a total of 46 hits and became the fifth on the team while having 5 stolen bases. Putz made the career-high record of 3 hits four times during the season of 2019 while standing or playing against Incarnate Word, Pitt, Georgia Tech, and Florida State.

While playing against Florida State, he made a career-high four RBI in March 2019. He went to appear for another game against Wake Forest and Pitt where he recorded a career-high three runs. Next on 28th March, he had his first career home run while playing for the first inning of Notre Dame with the total score of 9-6 and a win in hand. Despite football and baseball, Carter Putz has got experience in playing summer ball while being partnered with Duluth Huskies in Northwoods League.

During the year, the season was suspended after 13 games because of the short period due to COVID-19. Putz appeared for 11 games and made a start with 10 games during the abbreviated season. He finished the season, making a career record of .316 batting average, 11 runs, 10 RBI, 12 hits, and one home run. He earned the third rank on the team and ran for the batting average of .316, 11 runs making him earn a fourth place on the team and 10 RBI.

Putz began the year with 47 games on the season and ended the year with a record-making score of 40 runs, slashed .305/.369/.492, 57 hits and making another record of 11 2B, 3 3B, 6 HR, 45 RBI, and 3 SB. with the record, he became one of the six Irish personalities to earn the honor of South Bend Regional All-Tournament Team. he further made the history by becoming one of the four Irish personalities to be named All-ACC teams following the season.

For the moment, there is no information on Carter Putz’s personal details. Either he is too busy preparing for his future career or trying to hide the details from the media.

For the moment, there are only career and accolade details of Carter Putz. He surely belongs to a good and financially supported family background, where he is having his grandfather with an athletic career background. It is for sure that he might be getting good support from sponsorship dealers and commercial hosts, making him earn around $500,000 as his total net worth.