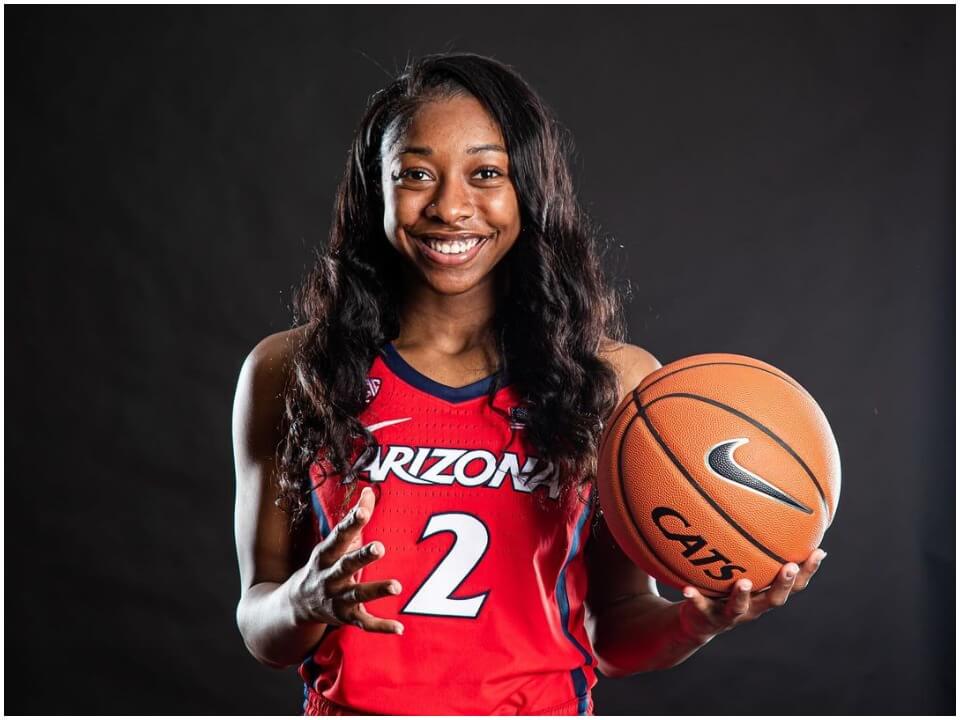 Aari McDonald is a hardworking and talented American Basketball player. She plays for the University of Arizona and during her high school, she was named to Max Preps All-State Third Team in California. Her Instagram account has 19.2 thousand followers and 2,984 followers on her Twitter account.

Aari was born on 20th August 1999 in Fresno, California. The names of her parents are Andrea and Aaron McDonald. She also has siblings named older brothers named Tre, Anthony, Aj, and two older sisters named Shinaed and Shayna.

At her high school, she became very active in the sports area. As a junior, she has posted six triple-double and one quadruple-double and earned an average score of 26.3 points per game and 9.3 rebounds per game. In her senior year, she has an average score of 22 points per game, 8.4 rebounds per game, 6.1 assists per game, and 6.0 steals per game. During her sophomore year, she was sat out due to the NCAA transfer rule. Later she was seen in many matches against Idaho, Montana, San Diego, Colorado, and many more.

Till now she was seen in 65 games and secured 22.6 scores of points per game. Recently she played matches against Connecticut, Indiana, Texas, UCLA, and many more teams. Her team won most of the games which made them proceed to the next upcoming round of the match. She must be training on her skills for the upcoming matches as some were postponed due to the Covid-19 pandemic.

Aari is currently all over the news like ESPN because her team Arizona won over Connecticut in the latest NCAA match with a score of 69-59.  The match was held on 2nd April 2021. She was appreciated and highlighted a lot because of her skills. Her focus has always been on the game and has not been a part of any controversies yet. She likes to keep her private life away from the media.

Aari is currently engaged to Devon Brewer who is a Marathon runner and alumni at the University of Arizona. He proposed to her at one of her games.  She has posted a picture of him on her Instagram account. They do not share much about their relationship with the media. She also spends a lot of quality time with her boyfriend, family, and training for her upcoming matches.

Aari earns a lot from her Basketball career by winning the competition. She earns enough to satisfy her needs. According to sources, her net worth has not yet been updated. Her other sources of income are from her sponsors and event appearance.